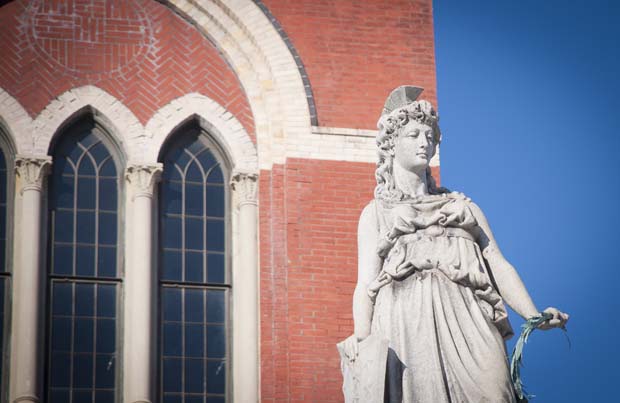 This Tuesday, Sept. 12 Kingston Democrats will cast ballots in an unusually busy party primary. Democratic candidates in three of the city’s nine wards and a single county legislative district face challenges either in a party primary or a write-in “opportunity to ballot” from opponents who, in most cases, are also running on the Republican Party line. The crowded primary ballots led Kingston Democratic Committee Chairman Joe Donaldson to accuse Republicans of fielding “weak Democrats” as Republican candidates.

“It’s very unusual,” said Donaldson. “It seems like you have a lot of people who don’t know what they want to be.”

In the city’s Eighth Ward, incumbent Alderman Steve Schabot faces two primary challengers. Cassandra Burke, a University of Albany political science student and tenant activist at the Rondout Gardens housing complex, and James Rodden, a retiree and head of the city’s Zoning Board of Appeals. Rodden also holds the Republican, Conservative and Independence Party lines. His appearance on the Democratic ballot drew criticism after Donaldson and other Democrats criticized him for switching his party enrollment to Republican — a switch which won’t take effect until after this year’s election — and then running in the Democratic primary.

“Cassandra I have no problem with, she did what she was supposed to do and she was up front about it,” said Donaldson. “Jim Rodden has not been up front at all.”

The second primary on the ballot has incumbent Ward 1 Alderwoman Lynn Eckert seeking to unseat county lawmaker and fellow Democrat Peter Loughran from the District Five seat he has held for two decades. Eckert, a Marist professor of political science, has aligned herself with Mayor Steve Noble’s progressive “One Kingston” agenda. Loughran has been a steady, if low-key, presence in the legislature, but has drawn fire from some on the progressive wing of his party for lining up with body’s Republican minority on some key votes. Despite that, one of the leaders of the legislature’s progressive wing, New Paltz Democrat Hector Rodriguez, along with fellow Democrat Jonathan Heppner, has endorsed his re-election campaign.

Polls are open from noon-9 p.m. To find your polling place, visit vic.ntsdata.com/ulsterboe/pollingplacelookup.aspx.