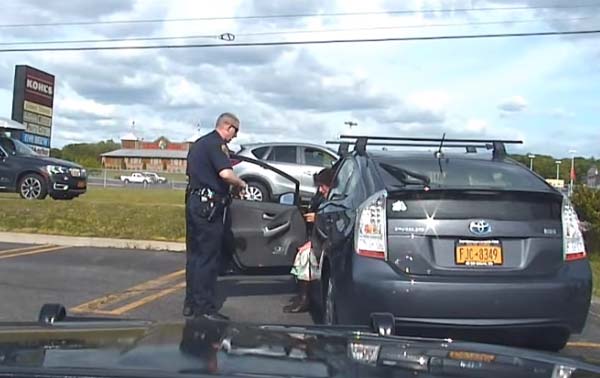 For all the speculation over who zoomed whom at the now-infamous Jennifer Schwartz Berky traffic stop in the Town of Ulster in May, the dash cam released last week was anticlimactic.

Given the concerted efforts by county Legislator Berky and her lawyers to suppress the tape until well after Election Day, I expected something confrontational between the accused and the arresting officer. I was half right. It was Berky who totally lost her composure, repeatedly crying, whining, begging and attempting to influence the officer: “I’m a county legislator.” “You singled me out.” She was the victim writ large.

It was just a traffic stop for hardly excessive speeding on a busy suburban road. Her fate in a town court known for leniency to first-timers would probably have been something light, like a seatbelt violation.

But Berky took it to another level, ultimately involving the town board, the sheriff, the town police chief, a pair of lawyers, the state freedom of information office, various and sundry politicians and a few curious journalists.

The only hints we got after months of probing was from high-ranking police officers who had seen the tape.

Like the cops, we’re paid to be skeptical, so I wasn’t about to embrace pre-release police assessments that arresting officer Gary Short acted in an exemplary manner. Cops, pols, journalists and other tribes of every sort tend to cloister in crisis, after all.

“Professional” was the word town Police Chief Kyle Berardi and County Sheriff Paul VanBlarcum separately used to describe Short’s behavior at the scene. The tape, released to the public last week, indicated that Short, who may have thought he had pulled over Tonya Harding, should be nominated for sainthood, if not promoted to sergeant.

Even Berky recognized Short’s remarkable restraint under duress in a written apology three days after the town board voted unanimously to release the tape. “I know my interaction with police officer Gary Short was unacceptable,” she wrote,” I want to apologize to Officer Short and thank him for his patience and professionalism with me during a very difficult time.” Lacking in this mea culpa was that it was Berky who had made things so difficult.

Stupid came about halfway through the 26-minute encounter when an apparently exasperated Short offered to write Berky a non-moving violation seatbelt violation instead of a 13-mph-over-the-limit speeding ticket. Ninety-nine out of a hundred drivers would have grabbed that pass, wished the officer a safe patrol and fled the scene. Not Berky. She had been wearing her seatbelt, she told the cop. Short went back to his patrol car and wrote her up for 43 in a 30.

The voters will decide

The voters will decide what effect this escapade will have on her election next Tuesday. Before the tape went viral, even unto national media, Berky was a shoo-in. She’s been an active legislator, well-prepared, diligent in her duties. She is well-spoken and articulate, even though some fellow legislators find her a bit rigid, argumentative.

Berky in her first term has become a fixture at almost every public gathering. A former deputy county planner and a practitioner of urban planning, she is well-suited to represent Kingston in a period of profound change.

She’ll face Brian Woltman, Democrat turned Republican in a heavily Democratic district that covers most of the downtown area of the city. Having buried Woltman in a Democratic primary two years ago and attracted 1,330 votes running unopposed in the general, Berky would have breezed.

That was then. The tape was more than just a picture, much, much more than a thousand words. Democratic efforts to suppress the tape speak to that. The images will linger in the minds of some voters.

We are a forgiving people, especially for first-time offenders. Other than harkening to sunnier Kingston days, Woltman has done little to present himself as a credible alternative, a plethora of lawn signs notwithstanding. What might have been a Berky landslide and perhaps a leadership role in the 2018 legislature could come down to a single-digit affair, maybe even a nail-biter.

Berky has learned a bitter truth about public service. Lionized in the press, as she was, she must now fully realize that public officials face special scrutiny, even for minor offenses. How they respond can be telling.

Airbrushed out of the happy news last week that Ulster County had settled on a choice between two sites for a fire training center was the announcement that the original site on county-owned property near the college had been dropped on residents of Cottekill last April like a bomb. Following shock and uproar and months of protest — residents collected some 1,200 signatures in opposition — the county announced sites on public land in Shawangunk and the Town of Ulster, eliminating potential sites in New Paltz, Marbletown and most importantly Cottekill.

The administration will take credit, again and again, for providing a much-needed and long-delayed facility for volunteer firefighters. The process left much to be desired.

Checks in the mail

Olive Town Supervisor Sylvia Rozzelle recently noted that promised state grants, six years after a hurricane and a tropical storm devastated her town, have finally begun to arrive. Six years! After a natural disaster. To fix the roof on the town hall.

Rozzelle, she of country savvy, is (wisely) not complaining. Looking this vindictive gift horse in the mouth could produce some nasty bites, a kick in the pants, or further bureaucratic delay.

Along those lines, Kingston Mayor Steve Noble shouldn’t start spending that $10 million revitalization grant the state promised last month any time soon. I’m predicting the first bucks won’t arrive until around mid-October of next year, just in time for the governor to take credit all over again. By Olive standards, that would be warp speed.

Asked why he referred to himself in the third person, former senator Bob Dole used to say, “Bob Dole says you can’t get your name out there enough.” And so, Dutchess County Executive Marc Molinaro has stuck his toe in gubernatorial waters with two announcements. First, he’s formed an exploratory committee to run for governor. Secondly, he’s advising New Yorkers to vote yes on a constitutional amendment next week regarding land swaps in the Catskills.

The exploratory committee commits Molinaro to nothing more than raising some money and traveling around the state to talk about the state of state affairs. Environmentalists worry that the land exchange they support could go down with the ConCon proposition they vehemently oppose.

Hopefuls are hoping Andrew Cuomo wears out his welcome, like his father did in’94, and that some obscurity claims the crown. Consensus — whoever that is — suggests the current Cuomo still has legs, and some $30 million in his war chest.

“The report of my death was an exaggeration,” wrote Mark Twain from London in 1897, following reports of his demise in New York City newspapers. He died in 1910. Rochester Town Supervisor Carl Chipman might have had similar feelings after reading of his demise — swiftly corrected — in the Middletown paper last week. Chipman, 57, is retiring after five terms and plans to join the ministry. I’ll miss Chipman, an outspoken straight-shooter.

It was a dark and stormy afternoon, but upwards of 200 people turned out to memorialize the late Rabbi Jonathan Eichhorn at Kingston’s Congregation Emanuel on Sunday afternoon, testimony to the esteem in which he was held in the community. With Eichhorn’s family in attendance, Cantor Bob Cohen emceed a joyous celebration.

This just in. County Exec Mike Hein and Comptroller Elliott Auerbach have finally agreed on something. Both are supporting Democrat Laura Hartmann against incumbent Republican Jim (not Joe) Maloney in the Town of Ulster-Town of Kingston county legislature race. Hein, who claims solidarity with the legislature — some of them dislike Auerbach —rarely issues public endorsements of candidates. Auerbach picks and chooses. Do they smell upset?

I erred last week in listing Alderwoman Deb Brown as the Eighth Ward representative. She’s finishing her sixth year as the Ninth Ward rep. As she pointed out, I should know better. I live there.

To Tuesday. I’m not sure if these figures are exact, but recent reports on voter turnout indicate 80 percent vote in presidential elections, 60 percent in state races in off years, and 40 percent in local elections.

Apathy is the usual excuse, but some of these non-votes are seriously considered. Consider this possibility: More than a few elections will be decided by less than a percentage point this year.

Free telescope: Just explain why you want one

Free telescope: Just explain why you want one