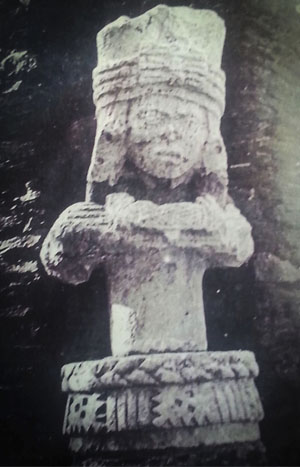 There are watery places in the mid-Hudson Valley whose accessibility actually increases after there has been a frost or two – places where a small craft’s passage is hampered by overgrown water weeds in high summer. One of those places is Tivoli Bays, a state Wildlife Management Area that hugs the eastern shore of the Hudson for a couple of miles between Barrytown and Tivoli. The South Bay is a proper bay, as the word is usually understood: an expanse of open water. The North Bay is an intertidal marsh, in the midst of which Cruger Island appears on a map as part of a green mass contiguous with the mainland. Along with Magdalen Island just a little further upstream, Cruger has a spine of bedrock not found in the surrounding marshy areas. But you can’t quite paddle all the way around it. It’s connected by a causeway road to the Bard College campus, and straddled down the middle by the Amtrak raised railbed. It’s more like Cruger Peninsula these days.

But in the days when it was the home of the Cruger family, canoe excursions by moonlight along the island’s shores were the height of dramatic entertainment. From the mid-1840s to about 1920, those shores served as the unlikely setting for a collection of Mayan sculptures brought more than 1,700 miles north from their points of origin by writer/adventurer/railroad entrepreneur John Lloyd Stephens and his sketching sidekick, Frederick Catherwood. The massive stone artifacts were all that remained of boatloads of priceless antiquities collected during the two explorers’ forays into the Yucatán, following a massive fire at an exhibition in 1842.

The Stephens/Catherwood expeditions had been financed by a wealthy New Yorker named John Church Cruger, owner and resident at the time of Cruger Island. It is said that he was inspired by an 1834 Thomas Cole painting titled Moonlight to construct some faux ruins of fieldstone along the shores of his riverfront estate, the better to display his archaeological treasure trove for evocative nighttime viewing. Extant historical photographs in the Bard College Archives show tall, elaborate arches-to-nowhere, created purely to evoke an archaic atmosphere. One cannot help but wonder if 20th-century Bard art professor Harvey Fite, who spent time in Honduras studying Mesoamerican stonework and showed its influence in his own sculpture, was partially inspired by the Cruger installations to transform his bluestone quarry in High Woods into the environmental artwork now known as Opus 40.

John Church Cruger died in 1879; his last surviving descendant, Cornelia Cruger, moved to the mainland and sold the estate in 1919. Remains of the 19th-century towers can still be found on Cruger Island, though the ruins are fenced off from the access road, and the island is technically closed to hiking because it is a known bald eagle nesting site.

The authentic 12th– and 13th-century statuary from the Yucatán was sold to the American Museum of Natural History in New York City, where much of it remains on public display in the Hall of Mexico and Central America. Among the notable pieces are a turquoise-studded mask of a god and a human figure with two elaborate detachable headdresses, both from the façade of the House of the Governor at Uxmal. There’s also a doorjamb from Kabah showing a subordinate, perhaps a vanquished foe, kneeling at the feet of some warlord crested with elaborately flowing quetzal plumes.

That nearly-60-year episode as a showcase for plundered bits of medieval Mayan decorative architecture is but a small segment of Cruger Island’s storied history. First home to the Wappinger and then Mohican tribes, it was purchased in 1680 by Colonel Peter Schuyler, later mayor of Albany, as part of a patent that included the Town of Red Hook. Subsequent owners built houses on it; the Cruger Island Road causeway was completed by the time the Cruger family took possession in 1835. In the 1920s, a “home for the aged and convalescents” and two summer camps for underprivileged youths were established on the island; it then became a point of transfer for rumrunners during the Prohibition Era. An archaeological survey was conducted in 1947. Bard bought the site in 1960, and in 1979 conveyed it to the New York State Department of Environmental Conservation.

Today Cruger Island is part of the Hudson River National Estuarine Research Reserve; you can find a map of land and water trails and kayak put-ins at www.dec.ny.gov/docs/remediation_hudson_pdf/tivoli.pdf. Find out more of the history of “Uxmal-on-Hudson” at www.bard.edu/archives/voices/uxmal/uxmal.php.